Part 1 : Offsets, Bubbles, Allowances, Emissions Trading: How We Got Here and Where We are Going

After 40+ years of use, it is generally accepted that these market-based approaches can produce more cost-effective outcomes than traditional regulation modes. As a result, the concept of using trading-based “carrots” along with regulatory “sticks” is now embraced by many regulators and organizations of influence, like the World Bank and the United Nations. Today, trading-based programs to regulate GHGs are commonplace. And because of ‘trading’ and the Smithian’ invisible hand,’ tens of billions of dollars are invested in producing many billions more in environmental benefits — a good result for regulators, industry, the environment, and the public.

But where and how did emissions trading start? What can we learn from its evolution, and how can we begin to understand its use to influence positive social change? This note aims to address some of these questions and shed some light on the importance of the evolving emissions markets in achieving environmental goals.

There is no doubt that regulators prefer command-and-control-based regulations, ranging from managing the location of polluting activities to the choice of emission limits on specific sources of specific emissions. Such systems are seemingly straightforward: “just tell industry what to do, how to do it, and by when.”. However, the real world can have many political and economic gears rubbing against environmental progress. As a result, what seems like a successful regulatory program can be cost-inefficient, stifle invention and innovation, and become an illusion. So how can we do better?

Not surprisingly, the early work promoting economic incentives to cure negative externalities (e.g., pollution) came from economists such as A. C. Pigou, who believed the best way to secure emission or effluent reductions was through a tax that would balance associated costs and benefits. Of course, these costs would be passed on to consumers, and lower-cost production processes should emerge.

By the late 1970s, environmental engineers, attorneys, economists, policymakers, and advocacy groups had positions on how pollution-control policy should be conducted, including what should be the goals and the use of both regulatory “carrots” and “sticks” to be used to attain these goals.

Among economists, the debate was narrow: “Do we attain goals faster and better by imposing price controls or limiting the number of discharges and letting prices adjust?” Are taxes a better tool than quantity limits to achieve regulatory objectives? But each tool has one major problem associated with its design and implementation.

As fate would have it, the opportunity to apply a market-based solution had a quantity-specific solution. So, when the crisis appeared between conflicting economic growth imperatives and the dictates of the US Clean Air Act, the quantity-based solution placed the US on a path toward promoting a family of quantity-limiting, property-right-based emission control programs.

Success: New sources were addressed first, and offsets created the template for other trading-based environmental programs

When the US Clean Air Act was originally passed, it was assumed that attaining clean air goals could be achieved in a few years, not decades. One provision of the Act was the prohibition of any new emitting source or major modification in a dirty air area after the attainment deadline was reached. If the air quality did not meet national standards, there could be no emission increase by any new source. However, fast-growing so-called non-attainment areas like Los Angeles and Houston were on a political collision course to manage conflicting social goals — jobs from new sources or environmental protection.

The US Environmental Protection Agency (EPA) was faced with the prospect of prohibiting new emitting sources from entering these regions until the air quality standards were met, but that would not happen until many years in the future. This was a painful and visible example of a conflict between two legitimate policy objectives — economic growth and attainment of health standards.

While EPA had a market-oriented Policy Office with an environmentalist-bent, the idea of “offsetting” new emissions emerged from EPA’s Region 9 leadership, and it was quickly embraced by EPA’s “Air Office” and “Policy Office.”

“In December 1976. EPA established what is known as the “offset policy.’’ This balanced the two goals of economic development and progress toward health standards. It allowed new source construction in non-attainment areas provided there was a net air quality benefit and that emissions were curtailed from the proposed new source to the greatest extent feasible. The offset policy was officially incorporated into the 1977 Act as a viable way of handling new source growth.”[1]

But because there are few new emitting sources moving into dirty air areas every month, its adoption was slow but steady.

By interpreting the Clean Air Act prohibition to mean no “net” increase, air permit applicants could obtain legally binding emission reductions to offset their emissions after installing the Lowest Available Emission Reduction (LAER) technology[2]. Simply put, to cite a news source, Mr. New-source, you must install the best technology that we (the regulator) require and then buy another party’s certifiable emission reduction credits to “offset” any remaining emissions.

As a result, advanced technology was mandated, and air quality was either maintained or improved by the new source’s entrance in the air shed.

While arithmetically simple, offsetting involves defining an emission baseline, establishing the nature of this new property right, addressing new permitting, measurement, and monitoring requirements, along with provisions for transparency and public comments. But the “offset” foot-in-the-regulatory-door set the stage for creeping-incrementalism as EPA’s Policy office sought to refine and extend the use of market-based compliance strategies.

Advocates for economic efficiency within the US EPA’s Policy Office sought to extend the trading concept from being applied only to news sources in dirty air areas to being made available to existing sources. Perhaps some excess emission reductions could be used against a permit obligation if air quality was improved or maintained. This program was called the Bubble Policy. (See figure 1 below, the press release announcing the Bubble Policy).[3]

As more companies employed offset transactions and developed so-called “bubble-based” compliance strategies, the regulatory record grew, and institutional impediments became obvious. On the review of these impediments, improvements were made, and approval of offset and bubble transactions grew. Soon the documentation of successful transactions confirmed theory — air quality can be maintained or improved while compliance costs can be reduced.

Between 1977 and 1982, much had been written about offsetting, bubbles, and controlled trading. Legal challenges and victories resulted in the steady diffusion of ideas, experiments, and outcomes, and there was a steady flow of graduate students eager to verify or correct and modify the EPA’s thinking about how markets could promote the attainment of environmental goals.

Yet, in terms of constituencies, there was more than a bit of reluctance among some stakeholders. Some observers imagined that trading could lead to unintended consequences such as destabilizing the environmental advocacy community. Some NGOs had fears of offset loopholes, thus undermining the quick and sure attainment of air quality standards.

Still, there was a steady flow of academic and use-case summaries that confirmed the power of the marketplace. Of the many confirmatory reports, one stands out — a comprehensive review of studies, use cases, legal briefs, and legal defences by the US General Accounting Office stated the obvious:

Establishing a market in air pollution entitlements could be a less costly, more flexible way to meet minimum standards of outdoor air quality. These entitlements allow emissions consistent with present standards governing outdoor air quality. Such a market could save the public millions of dollars relative to the price tag currently imposed by command-and-control regulations to meet the requirements of the Clean Air Act, estimated at $22 billion in 1979.[4]

GAO undertook this study to explore whether developing such a market is feasible, recognizing that numerous obstacles stand in the way. GAO’s purpose is to offer the House Committee on Energy and Commerce and the Senate Committee on Environment and Public Works an assessment of this novel approach to air pollution control at a time when the Clean Air Act is being reauthorized. To the degree that such a market incentive approach could reduce compliance costs by using scarce economic resources more efficiently, a number of important results follow. First, more economic growth could be achieved without sacrificing the benefits of good air quality. Secondly, the individual taxpayer could benefit from more efficient operations of regulatory agencies.[5]

GAO’s review of a number of studies suggests that a full-scale market in air pollution entitlements could, in some instances, save the industry as much as 90 percent in pollution abatement costs as compared to command and control. In addition, cost data gathered in GAO’s fieldwork suggest similar large potential cost savings.[6]

Offsetting works: bubbles save money; what is next?

One strategic issue before advocates of market-based emission control programs was whether to push for the adoption of each of several individual types of emissions trading initiatives or focus on the core principles. As a result, instead of investing more resources to promote the Bubble Policy and more emissions banking experiments, attention was refocused to promote the fundamental concepts associated with creating tradable property rights. As noted earlier, the focus on an integrated system of creating, certifying, and using emission credits led to the development of Controlled Trading (later called emissions trading).

Emissions trading (formerly “controlled trading”) included five separate but related concepts: emission reduction credits, offsets, netting, bubbles, and emissions banking. It is the emission credit that is most important; after all, we are creating property rights.

Emission reduction credits, or ERCs, are the common currency of emissions trading. They are created when emissions are reduced to a greater degree than required by law, and permits issued by regulators reflect that incremental reduction. For example, a firm can create an emission credit through process changes, plant retrofits, changes in production or operating hours, and/or equipment shutdowns.

To be eligible for an ERC, an emission reduction must be:

Certified ERCs can be bought, sold, or leased to existing, new, and expanding air emission sources within specified air sheds.

Once an ERC is identified, quantified, and certified by the regulatory authority, there are several ways in which the credits can be used. The ERCs can be retained by a particular company and used for netting (a way to avoid a regulator regime), offsets (used to comply with a regulatory obligation), or as part of a “bubble.”

Those attributes lead up to a focus on an essential question: What is the nature of the property right associated with an emission credit?

The Emissions Trading Policy Statement of 1982 further integrated offsetting, bubbling, and emissions banking into a coherent whole. It also established the legal requirements for creating, certifying, registering, storing, and using ERCs. Furthermore, it showed how regulators should process relevant transactions. The Policy Statement completed the conceptual process of a series of experiments leading to a coherent system addressing the creation and use of a new and limited property right.

A special thanks to Billy Richards, Charlie Terry & John Palmisano for writing this article. This piece was written as an illumination of the background conditions that helped to form the Changeblock platform.

[2] For an example of how LAER is determined, http://www.aqmd.gov/docs/default-source/bact/bact-guidelines/part-a—policy-and-procedures-for-major-polluting-facilities.pdf. 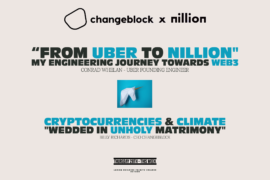 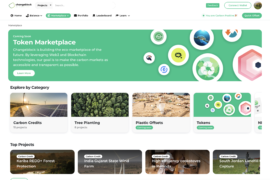 How do you use the Changeblock Marketplace?